Albert went right back to sniffing as soon as he got his Eddie’s Wheels dog wheelchair.

Albert, a French Bulldog, who had spinal surgery in April 2011 came to see us two months ago to have stirrups put on his wheelchair. Despite having feeling in his feet, he was dragging his legs and “being lazy” about using his rear legs in the cart. Nerves regenerate very slowly – only one millimeter a month, and in the time that Albert was using his cart and healing, he had lost the muscle memory he needed to remember how to walk again. He’d also been going to hydrotherapy for over a year, but was still not “getting” the idea that he could walk on his own using his rear legs again…

By coincidence, we had just started collaborating with Erika McElwey, a canine rehab practitioner who had worked with us with our own dog, Sweet Pea, during her tenure at Rivermeadow Farm Rehabilitation Center in Windsor, Ct. Erika is helping us to establish protocols for the use of our adjustable therapy stand and the Pet Zen dogtreadmill we have on our premises. We were looking for likely rehab clients for her and Albert was the perfect candidate. After a long consultation that included taking his history, working with him outside on grass, working with him on the stand on the treadmill and doing cold laser treatments, Albert’s owner went home hopeful that these land-based therapies would get Albert back on his feet. In each session Erika re-trained Albert’s muscles by manually assisting him as he walked on the treadmill. His owner re-enforced this training at home by encouraging him to stand on his own and not rely on the cart. Following our advice, she risked a few scrapes on his toes in order to activate the deep pain reflex and make him pick up his feet and use his legs. After less than half a dozen sessions, Albert is now walking on his own, using his cart only for long hikes, as he still needs to regain his endurance. But he’s working hard. Watch these videos to see his progress: 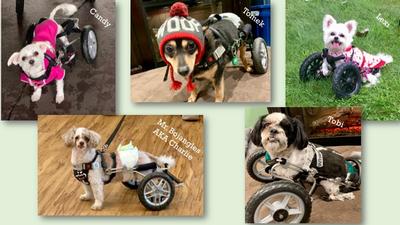 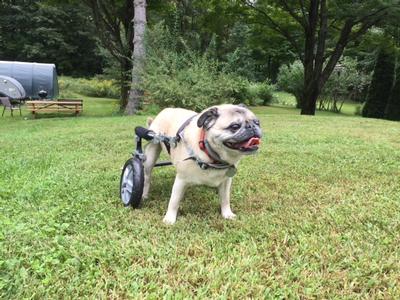 Pug Myelopathy: How a Balanced Cart Can Help

Pugs are susceptible to a variety of disabling conditions that cause ataxia and weakness in the hind end.
Posted: Mon, Sep 24, 2018 To: Eddie's News 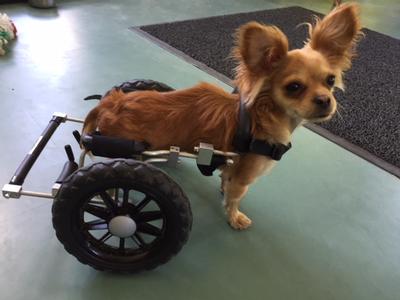 Welcome Finch! The tiny chihuahua with a broken back

Mon-Fri 9AM-5:00PM EST
IN-PERSON VISITS ARE BY APPOINTMENT ONLY
*DUE TO COVID, WE ARE NOT CONDUCTING ANY IN-PERSON APPOINTMENTS AT THIS TIME*