In a recent issue of All Animals, the magazine of the Humane Society of the United States, the cover article was about the increasing prevalence of inherited genetic disorders amongst pure bred dogs.

Corgis can be tested for the gene involved in degenerative myelopathy

If it were not for the existence of pure-bred dogs, there probably would not be enough demand for dog wheelchairs to support the half-dozen dog wheelchair companies in the U.S.

I remember the first time I met a boxer with degenerative myelopathy, the canine version of ALS (Lou Gehrig’s Disease).  It was 2001, and this dog was a Westminster champion, the epitome of the boxer breed, and he was falling down, dragging and scissoring his legs.  His owner agonized about whether to provide him with a dog wheelchair, or just euthanize him and not let anyone know that he was sick. After all, he had put out to stud for years.  In 2001, there was no proof that this was an inherited disease.  And it was unheard of in boxers! But this was his companion dog, as well as his show dog.  He wanted a cart so that his dog could regain his dignity, independence and enjoy a good quality of life for the time he had left.

His dog loved his cart, and the owner knew that he had done the right thing both for himself and his dog.  Then he decided that he needed to share his experience with his colleagues on the show circuit.  He took his prize stud to a  dog show, in his wheelchair, and was shocked at the response.  No one wanted to acknowledge the truth about this dog’s health.  The breeders’ attitude was that this was something to be ashamed of, that it was poor taste to exhibit this dog,  and after all, he was 8 years old, time to move on and get a new dog!

Times are changing!  Breed clubs are sponsoring the genetic research at the University of Missouri Vet School, and responsible breeders are testing their dogs for DM gene. Visit CanineGeneticDiseases.net/DM/ancmntDM.htm for information, and ask, before you buy a purebred dog, if the dog has been tested for DM.

IVDD is common in miniature dachshunds.  I have a database over 10 years old with all the ages, weights and measurements of dachshunds who have become paralyzed due to IVDD. My purely anecdotal impression is that the dogs most likely to become paralyzed are between 4-7 years of age and between 10 -15 lbs.  The youngest dachshund for whom we built a cart was 2 years old and X-rays showed calcifications of several discs.

Disabled dachshunds can live long and healthy lives despite paralysis using our dog wheelchairs. Because our carts are warranteed for life of the dog, it is not uncommon for our dachsie clients to use their carts for over 10 years. 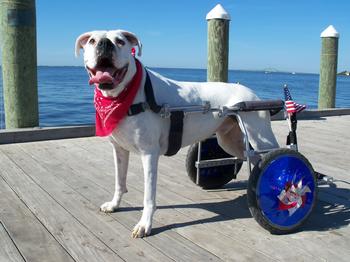 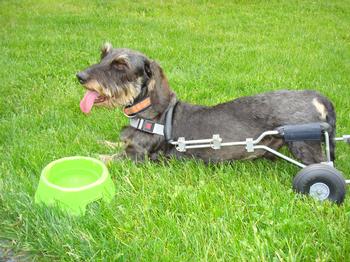