While our Doberman, Buddha, was the inspiration for Eddie’s first canine wheelchair, we were not in business very long when we realized there was so much more we needed to learn about different dogs and their disabilities.

Daisy, at the age of 6, managed to wade through a hayfield full of clover in her cart.

In an effort to learn more specifically about dachshunds, who comprise over 20% of business, we adopted Daisy, a 6 year old paralyzed dachshund in 2001.  Now Daisy is going on 16 years of age, and she certainly has taught us a thing or two.

Like many doxies with IVDD, her family was unable to care for an incontinent, paralyzed pup, especially living in a 4 story townhouse.  Surrendered to the St. Francis of Assisi Animal Shelter in Jersey City, the shelter called us to order a cart for her, and we decided to adopt her and give her a job as official Chief Executive Dog at Eddie’s Wheels.

Coping with an active, incontinent, paralyzed dog who could drag herself everywhere was just as challenging as coping with a paralyzed 80 lb. Doberman.  Unaware of the damage she was doing to her belly and legs by dragging, and dribbling urine everywhere she went, we couldn’t wait to get her in her wheels.

Daisy did NOT take her cart instantly.   Unlike most dachshunds, she considered herself a perfect model….standing stock-still for her photo opportunities and not even trying to walk in her cart.    After 3 frustrating days, I found the right motivation:  I put her at one end of the house in her cart, went to the kitchen and filled her food dish, and she was off and running.

Learning to manage her incontinence was the next challenge.  Starting with diapers until we’d cleared up a UTI that she came with, and finally learning to express her bladder, it was only a matter of time before she was able to control her bladder again.  As for poop, as they say…..poop happens.  A healthy gluten free diet with no table scraps produces easy- to- pick- up, dry feces. 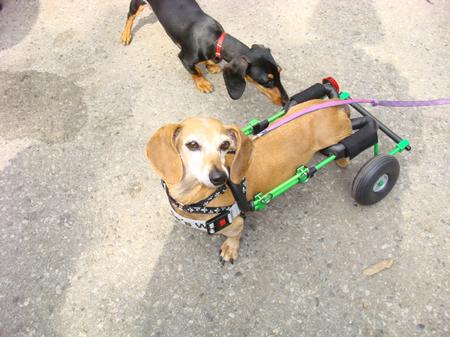 It only took 3 months for Daisy to start using her rear legs again.  Despite having had 4 herniated discs, no surgery, and no deep pain response, she did have a strong spastic reflex when you placed her legs on her stirrups.  She would pump her legs against the rolling stirrups while she ran in her cart with her front legs.  Then suddenly I noticed that I couldn’t keep her feet on the stirrups – were they sliding off or was she taking her legs off them?  It was clear that she was doing it herself.  For awhile, she dragged her feet behind her, toes scraping on the sidewalk until the nails were down to the quick.  Just as the blood trail was appearing – the miracle happened – it hurt enough to make her pick up her feet by herself.  After that she started using her rear legs like a child on a scooter, pumping with her rear legs as best she could.  Over the course of the next couple of months, she gained proprioception, and established the ability to use her rear legs in rhythm with her forward stride.  Climbing up the gentle slopes in our yard encouraged her to use her legs and not get lazy.

Daisy at the Dachshund Meetup in Washington Square Park.

Daisy has been a fabulous example of what a cart can do for a paralyzed dog.  She’s been to the Western Vet Conterences,  Holistic Vet Conventions, Animal Rehab Symposiums, and visited numerous veterinary schools and colleges.  Her feisty take-charge attitude  challenges anyone who might feel sorry for her or question the quality of life she leads.  At the age of 16, she shows few signs of slowing down, though she’s mellowed with age, and is happily passing the torch of official mascot dog to Willa.