Eddie and I visited Best Friends Animal Society in Kanab, Utah in 2004, after exhibiting at the Western Veterinary Conference in Las Vegas.   Best Friends is truly an inspiring place .  Located in Angel Canyon, where the Lone Ranger and many other western movies were shot, I was first struck by a strong sense of deja vu, of coming home, and it was that sense of homecoming that the animals in their care must have as well.   Here, at last, is a place that can be a forever home for homeless pets.  Even better, it is a place that animals can find forever adoptive homes through their outreach efforts.  Visitors to Best Friends can have a sleep-over with a canine resident if they are staying in one of the lodgings on the premises.

In 2004, when we visited with Daisy, our mascot, a paralyzed dachshund in a cart, Best Friends did not feel equipped to deal with the challenges of special needs pets, and they did not have any animals in wheelchairs.    Seven years later, things have changed.  Best Friends has a rehab department now, equipped with an  underwater treadmill, and staffed by a young woman who is studying animal rehabilitation.  We were called on this year to provide carts for two very special dogs in their care.

Rhubarb is a airedale mix who needs a quad cart to provide him with full body support.   It appears that he has a progressive degenerative problem – peripheral neuropathy, so the quad cart is crucial to his quality of life. Watch Rhubarb have a run in his quad cart:

Reading Rhubarb’s story is a hard read – he has overcome so much – parasites, a hole in his heart, and now a life of increasing immobility…..but he has touched so many hearts in his short time, and shown so much love and joy in simply being alive, that  the efforts put in to provide for his care  have reaped great rewards for all. 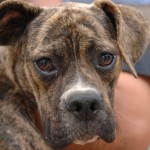 Alfie, a pitbull suffering from the after-effects of distemper, needed a front wheel cart with additional tip wheels and a headrest.  He only recently received his wheels and is already  learning how to maximize the attention he gets by trolling for treats in his cart.  Here’s what Carey, the animal rehabilitator has to say about Alfie and his wheels:

Alfie’s got some new wheels, and he’s getting comfortable in his new ride. Alfie’s been cruising around the garden and Dogtown Heights in his new go-cart. Alfie doesn’t let loose sand and gravel stop him; he goes four-wheeling in his all-wheel-drive cart! Alfie is like a teenage driver with his learner’s permit. Like any teenage driver, he needs to have a licensed driver with him as he’s learning to drive. We give him helpful course corrections with leashes attached to his cart so he doesn’t go too fast, crash or drive into a tree. You might actually think Alfie needs some cart insurance the way he drives. Alfie’s learning fast, too, and he sure likes to go fast. It makes me nervous, and I have to slow him down. I love seeing him in the spotlight. Alfie really loves the attention, and it’s the driving force behind his hind-legs engine.

Recently, Alfie has been going over for play dates with Rhubarb at the clubhouse, and they have been having a lot of fun cruising around together in their new carts. I really love the look of excitement on Alfie’s face when he’s cruising around with the volunteers and staff watching and cheering him on. He’s so happy. Alfie recently had a cart race with Rhubarb. It was like the Alfie 500. Alfie was in the lead by a cart length coming into turn four on the last lap, but on the last turn, Rhubarb passed him on the outside and took the checkered flag. Though Rhubarb won by a cart length, Alfie didn’t mind. Alfie led most of the race, and besides he was just there for a joy ride with Rhubarb. This race was held at “Rhubarb Clubhouse Field,” and I’m glad the home team won the first race. Alfie wants a rematch however, and next time we will race at Alfie’s home field, the “Alfie Go Garden Track.”

We are all so very happy for Alfie, and I feel like a proud father watching my special little guy grow up and become a little man. I am so thankful to have been able to watch him grow and blossom along his incredible journey. Alfie’s gone from being a baby, to a toddler, to a juvenile, and now he’s a young teenager who’s venturing out to learn and try new things. I’m so happy Alfie took me along for the ride, and he will always be my little Alfie that could. I love you, Alfie. Enjoy the ride, big guy.

Eddie’s Wheels Team is cheering you on!