It’s said that imitation is the greatest form of flattery and we’re seeing a proliferation of dog wheelchairs that, on first glance, look just like Eddie’s Wheels.  We’ve heard from a number of people in the  United Kingdom that Jim Colla’s dog wheels are purported to be the same as genuine Eddie’s Wheels.   While it is true that Mr. Colla was our UK rep  and was taught the basics of construction of our carts,  he is not a mechanical engineer by trade or training, and he produces only the most basic standard carts, with no possibility of upgrades or customization to address forelimb weakness.

A  inspection of Jim Colla’s Dog Wheels show  a dog wheelchair that mirrors the biomechanics of Eddie’s Wheels, supporting dogs on their pelvic floor with an opening yoke resting on the scapula.  Closer inspection shows that the fittings are plastic, instead of machined aluminum, and the wheels are heavy vinyl wheelchair wheels.  The saddle, on the cart pictured here, is too large, which affects the balance of the cart and puts too much weight on the shoulders.  The siderails are too long and need to be trimmed.

We understand that Europeans faced with a disabled dog may opt for Colla’s DogWheels because of the price of shipping and the possibility of personal service.  These are  good reasons and we would rather see dogs being helped by Colla’s wheels rather than some of the other carts on the market that do not support dogs on their skeletons and whose bio-mechanics can actually do harm to disabled dogs. 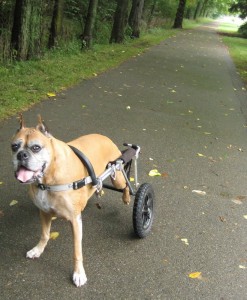 In a similar vein, we’ve heard from folks who have purchased a cart by J-Carts – which on first glance looks alot like an Eddie’s Wheels, but on closer inspection supports dogs on a simple cloth sling on their bellies, instead of the padded welded saddle that is the essence of our support system.  Apparently there are other imitators out there, but for the most professional service and the upgrades, there is only one source: Eddie’s Wheels.