Little Gus, a 3 lb. chihuahua was shaken by the neck by a husky and rendered quadriplegic.  But he and his family did not give up on him. Time is a great healer, and once Gus was past the crisis in his injuries, his family went looking for a mobility aid that would support his rehabilitation.  We designed a tiny walker with headrest. Gus had been down for a year, so for the first half hour we watched as Gus’s body stretched  and adjusted to being supported in a standing position. He had lost most of his core muscle strength and listed to one side, so we added additonal padding to the side to bolster him and keep his body aligned.   Slowly but surely his legs reached to the ground and he moved the cart on his own. 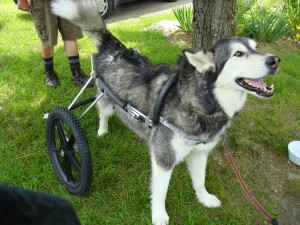 Nikki, a malamute with spinal curvature so severe as to be crippling came to us to see if there was any way we could build her a rear wheel cart. After taking some careful measurements, we were able to design a cart that matched the curvature of her back and offset the wheels so that her legs would not interfere with the wheels.

Curved cart for dog with scoliosis by Eddie’s Wheels 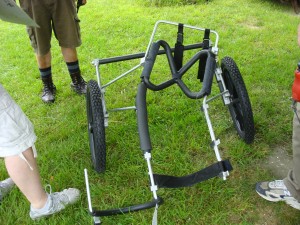 One of the benefits of working with Eddie’s Wheels is that we can and will customize our standard designs to make a wheelchair work for a pet who might otherwise not be a candidate for a pet wheelchair. Spinal curvatures, fatty lipomas, external fixators, cervical instability, and size (either tiny or giant) present us with design challenges, but we can meet them.

We recently built a cart for a disabled sheep, Summer, who lives at  AnimalWoodstock Farm  Sanctuary. She became disabled due to meningeal worms, but the real challenge was that when she came to measured in late April, she still had her winter fleece, which was 8 inches deep. Once shorn she would go from 19″ wide to 11 inches wide. So we had to make detachable siderails and two yokes to compensate for the seasonal differences in size. She was also very weak due in her front legs from having fallen on her knees and needed a cart that would take some weight off her front legs initially, and allow for more weightbearing as she rehabilitated. We built a cart with a variable axle to allow for this adjustment.

Summer with her winter fleece

Summer’s cart shows her width at the rump with fleece and her width on the sides once she was shorn. 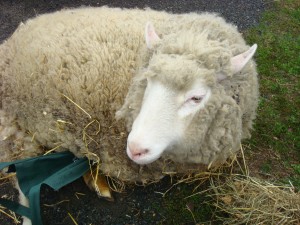 The design of the saddle, being a solid welded saddle that is angled to match the angle of an animals’ pelvis makes it easy and natural for the animal to center its body to the saddle. For Summer, we made a saddle that also allowed for more room in front so as not to chafe her udder, which has very delicate skin. 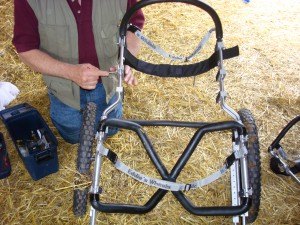 The removable saddle makes it easy to load a large 140 lb. animal into a cart – no lifting is necessary, simply thread the legs into the saddle holes and walk the sheep back into the cart.  Summer literally came back to life before our eyes, after having almost given up hope of ever walking again. 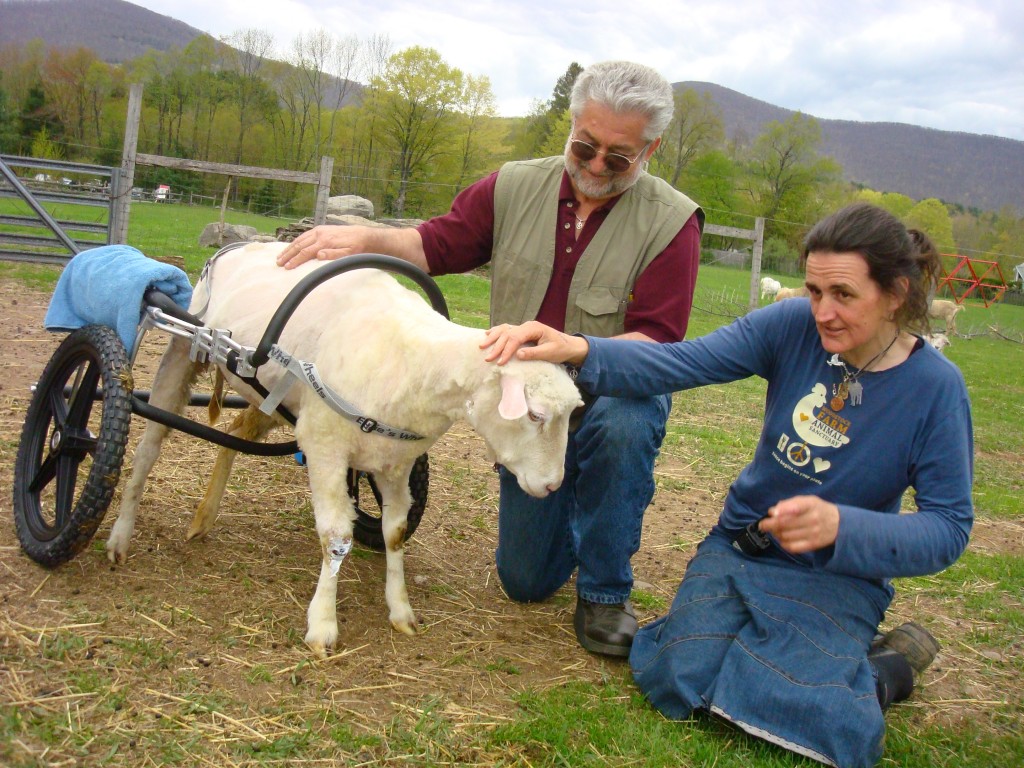