One of the main reason underwater treadmill hydro-therapy is used in animal rehabilitation is that the water provides bouyancy for animals with weak or paralyzed limbs.  With the water holding the animal up, a canine rehab practitioner can stand or sit in the hydro unit and work the animals' legs to retrain their gait.  Underwater treadmill therapy is also used for performance animals for conditioning and rehab.

However, there are some animals who just float in the water and won't do the work.  There are animals who hate being wet, and double-coated dogs who take forever to dry after a pool session.  Then there is the therapist to consider.  Dressed in a wetsuit or shorts,  bent over in a water tank, there's a significant toll to the therapist's bio-mechanics as well.  Underwater treadmills are also an expensive piece of equipment, and the price of sessions tend to reflect that investment.

Eddie has spent several years developing the adjustable therapy stand.  At first, the thought was that the stand would be used as a diagnostic tool. When  handicapped dogs are supported  in a healthy normal stance,  under their pelvic floor with additional support under the sternum (chest), it is possible to evaluate them much more easily than when you have vet techs holding dogs up in slings.     The stand could be used to perform physical therapy, allowing the practitioner total access to all four legs, and would be adjustable for height to allow more or less weightbearing.   Acupuncture, chiropractic adjustments and laser treatments could be done effortlessly, with the added benefit of observing  immediately any shifts and corrections that were achieved by these different modalities.

We recently provided Spin the disabled sheep with a therapy stand so that this 130 lb. animal  could receive therapeutic massage and magna-wave therapy.  When we delivered the stand, Spin was being held up in a sling by a Hoyer Lift, and  two people were trying to keep her still while the therapist worked on her.  We transferred her into the stand easily, by collapsing the front legs of the stand down on to the ground, and using the removable saddle to drop her into the rear of the stand.  Then we stood up the front legs of the stand , and voila! Spin was standing and the therapists could work in a stress free environment. 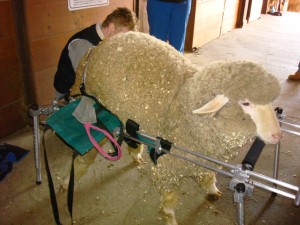 We also provided an adjustable therapy stand for Angel's Gate Animal Hospice in Delhi, NY.  This world- renowned facility provides lifetime care for disabled animals.  Sue Marino, the founder of Angel's Gate, has been using our wheelchairs for over ten years, as they are the sturdiest carts on the market.  She  brought a St. Bernard puppy to our facility in Shelburne Falls to be evaluated for a cart.  Casey was only 5 months old and only half -grown.  She was born with septic spine, and had not been in any mobility device for 2 months when she came here.  As a result, her spine was contorted, and it was virtually impossible to measure her for a cart, as her rear legs had strong spastic movements when she was held up in a sling.  We decided to put her in a stand in order to evaluate her and take measurements.
Once Casey was stood up for 30 minutes, we were able to fit her for a cart that she could use for a few months before she outgrew it.

In addition to cart use, Sue can use the stand to help retrain her gait by placing it over a land treadmill.  Sue is able to comfortably work Casey's legs and re-pattern them, much as physical therapists do for children with cerebral palsy. 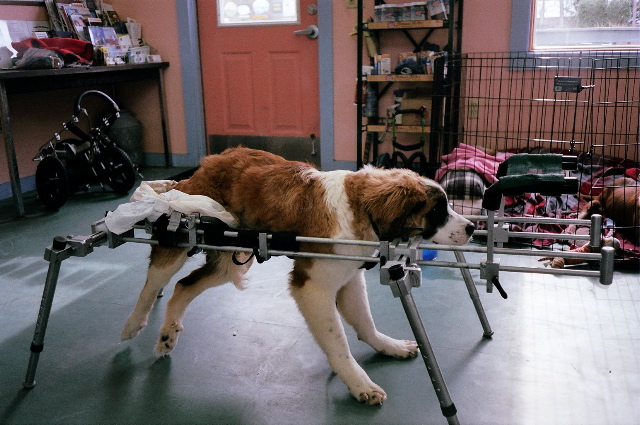 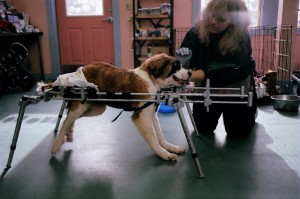 Here is Casey a couple of weeks later when we delivered the therapy stand to Angel's Gate. In the meantime, she had been able to use a standard wheelchair that we had provided for her, and was doing much better.

We have been field testing the therapy stand and so far have received nothing but good reviews.  IF you are interested in an adjustable therapy stand for your mobile practice or animal hospital, feel free to contact us;

Here is Casey a couple of weeks later when we delivered the therapy stand to Angel's Gate.  In the meantime, she had been able to use a standard wheelchair that we had provided for her, and was doing much better.